Sign up to receive Sarah’s Lifestyle and Yoga updates 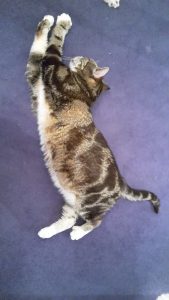 Well, it’s been a good yoga week so far for me and also for Yogini Cat, Mrs T.

My HTA yogis had a good stretch and blew away a few mental cobwebs and seemed to go back to their desks more relaxed than when they arrived!

I covered a class at Castle Royle this morning at short notice and encouraged the yoginis there to “turn down the volume” in the mind – the quieter you become, the more you hear!   I’m hoping to encourage my lovely Thursday yogis and yoginis to do the same later, although I expect the class, although structurally similar, will probably have a different feel to it. All about living in the moment!!

I’ve been dealing with some more Friends of Yoga admin into the mix as I’m dealing with their renewals at the moment. There seem to be too many overpayments and refunds needed! 🙂 Oh well. My karma yoga.

On the cat yoga front, there has been some late night yoga stretching from Mrs T, as you’ll see above, but the emphasis from both Mrs T and Mrs S has also been more on the relaxation side of their practice.  I would suggest they have even tried partner relaxation, as the evidence below demonstrates. 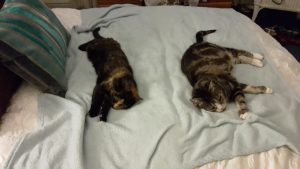 My week ends with a new beginning as I shall be absent from my usual Nuffield Piggott as I’m starting a two year yoga therapy course. I know it’ll be interesting and I’m sure it’ll be lots of work. Other than that, I go with an open mind. and what will unfold, will unfold.